Nope, they aren't 'Orthodox' - they are as Catholic as anyone, but merely follow their own distinctive (and gorgeous) liturgical and other traditions. These so-called Eastern Catholics also elect their own Bishops and follow their own legal code, all in perfect harmony with the Patriarch of Rome (that's the Pope for you). Here, some of their Bishops are seen blessing the congregation with the dikirion and trikirion, candlesticks with two and three candles, respectively, with which he makes the sign of the cross: 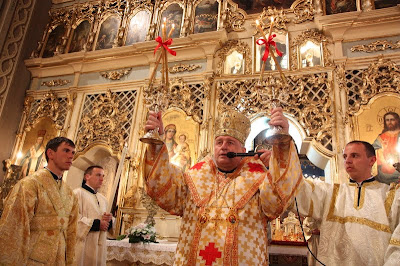 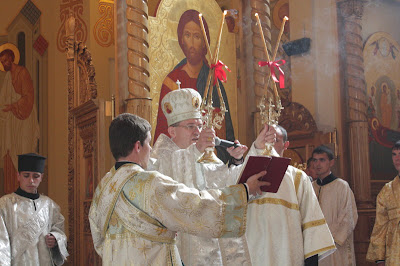 The trikirion symbolizes the Holy Trinity and the dikirion the dual nature of Christ: God and man.
(H/T Rorate Caeli)
On a related note: this evening I will be attending the annual meeting of the Fellowship of St. Alban and St. Sergius in Copenhagen. The fellowship exists to promote unity between Eastern and Western Christians - mostly Orthodox and Anglicans/other traditional Protestants, respectively, but I'll try to have some Catholic viewpoint thrown in. In fact, the unity which the fellowship seeks is already effected in the Catholic Church, where Eastern and Western Christians are even now under the same roof, united in doctrine and with equal rights and dignity - but unfortunately most of those involved in the fellowship don't realize that that unity is already there and just waiting for them to join in.
Posted by Gideon Ertner at 16:00

Explanation of the Title

The title is inspired by this verse from Apocalypse (Revelation) 22:2, where St. John is shown

"...the tree that gives life, bearing its fruit twelvefold, one yield for each month. And the leaves of this tree bring health to all the nations."


In the Heavenly Jerusalem thus stands the tree which gives life and healing to all Mankind.

What is this tree? It is none other than the Cross of Christ, the throne of divine love where the Son of God pours out His blood for the healing of all. And where is this Heavenly Jerusalem? It is right here among us, though still being formed; visible, although veiled; victorious, though still struggling. It is the wonderful mystery of the people of God, those who look to the Cross for healing - the One, Holy, Catholic and Apostolic Church.

Health (latin sanitas) is central to this blog. The English cognate sanity is now used to denote mental health - but mental health is certainly a prerequisite for anyone who deals with matters of bodily health.

This blog is dedicated to promoting health, spiritual as well as mental and bodily; to the rights of the unborn; to sound bio-ethics; to uncovering the grand mystery of the human person in its fullness as the image of the all-beautiful Creator.

May the Tree of Life, the Cross of Jesus Christ, give all us physicians the sanity we need to properly serve our patients.

Gideon Ertner
Copenhagen, Denmark
I am a young medical doctor from Denmark. By the great grace of God happily married and the proud father of a wonderful baby girl. Was raised a Protestant Christian but was finally persuaded by the awesomeness of the One, Holy, Catholic and Apostolic Church. Here the Truth is present in its fullness, the Truth which sets us free: Jesus the Christ. Truth - an especially pertinent issue for my profession but also for my generation as a whole, which needs it desperately. Read more about my journey here: http://ad-sanitatem-gentium.blogspot.dk/2009/02/background.html

SS. Cosmas & Damianos, Patron Saints of physicians, pray for us.

St. Thomas Aquinas, Patron Saint of scholars, pray for us.

The Cross, the Tree of Life