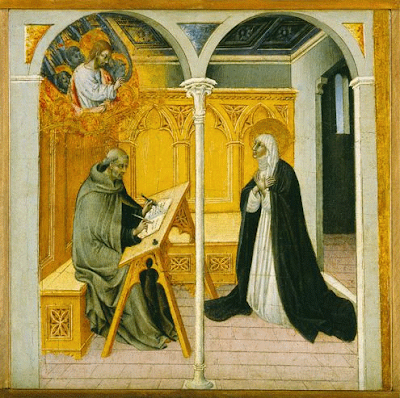 I would have written a post about this yesterday: April 29 is the feast day of St. Catherine of Siena. She is one of the greatest female Saints of the Church, and even in secular terms one of the greatest women ever to have lived. Though of very frail physical disposition, she had the mental strength of a lioness. She entered the lay section of the Order of Preachers (Dominicans) at age sixteen and, after living some years as a sort of hermit in her father's house, she began to write letters to the Bishops and Princes of Italy, urging them to put a stop to the wars which ravaged the peninsula. She also successfully implored Pope Gregory IX, who for various reasons had chosen to reside in Avignon, to come back to Rome. She earned widespread respect in the Italian political and ecclesiastical establishment and was even employed by the Pope as ambassador. Besides all this she worked for spiritual renewal in the Church and tended as a nurse to the sick. She received a large number of intriguing mystical experiences. Her Dialogue and letters are some of the most accomplished works of Italian litterature. She is invoked as the patron Saint of philosophers and, as one of the foremost female Catholic theologians, was declared a Doctor of the Church in 1970.

There is no doubt in my mind that St. Catherine's extraordinary success, despite her sex and the age in which she lived, as a politician, diplomat, and theologian was not in the tiniest way up to her own natural abilities, but were the result of supernatural grace. It is quite certain that the Pope and the princes with whom she corresponded would not have lent any attention to this sickly, illitterate young lady if it had not been the case that they sensed an otherworldly authority behind her words.
It is sad that what passes for 'empowerment of women' today is frequently promotion of a woman's 'right' to pervert her own sexuality and kill her own children (I am not denying that there is other, very good, work being done in the area of promoting women's dignity and responsibility). St. Catherine shows what true female strength is about: giving oneself completely over to God and letting Him work wonders through you. This is what we are all called to do, but women can in fact easier do so than men because they tend to be naturally more disposed towards humility and care of others (cf. John Paul II, Mulieris Dignitatem). This is not in any way a hindrance or something to be ashamed of - it is a blessing and a gift of which at least this blockheaded male is profoundly envious.
Posted by Gideon Ertner at 12:31

Explanation of the Title

The title is inspired by this verse from Apocalypse (Revelation) 22:2, where St. John is shown

"...the tree that gives life, bearing its fruit twelvefold, one yield for each month. And the leaves of this tree bring health to all the nations."

In the Heavenly Jerusalem thus stands the tree which gives life and healing to all Mankind.

What is this tree? It is none other than the Cross of Christ, the throne of divine love where the Son of God pours out His blood for the healing of all. And where is this Heavenly Jerusalem? It is right here among us, though still being formed; visible, although veiled; victorious, though still struggling. It is the wonderful mystery of the people of God, those who look to the Cross for healing - the One, Holy, Catholic and Apostolic Church.

Health (latin sanitas) is central to this blog. The English cognate sanity is now used to denote mental health - but mental health is certainly a prerequisite for anyone who deals with matters of bodily health.

This blog is dedicated to promoting health, spiritual as well as mental and bodily; to the rights of the unborn; to sound bio-ethics; to uncovering the grand mystery of the human person in its fullness as the image of the all-beautiful Creator.

May the Tree of Life, the Cross of Jesus Christ, give all us physicians the sanity we need to properly serve our patients.

Gideon Ertner
Copenhagen, Denmark
I am a young medical doctor from Denmark. By the great grace of God happily married and the proud father of a wonderful baby girl. Was raised a Protestant Christian but was finally persuaded by the awesomeness of the One, Holy, Catholic and Apostolic Church. Here the Truth is present in its fullness, the Truth which sets us free: Jesus the Christ. Truth - an especially pertinent issue for my profession but also for my generation as a whole, which needs it desperately. Read more about my journey here: http://ad-sanitatem-gentium.blogspot.dk/2009/02/background.html

SS. Cosmas & Damianos, Patron Saints of physicians, pray for us.

St. Thomas Aquinas, Patron Saint of scholars, pray for us.

The Cross, the Tree of Life